I thought as a, hopefully, regular blog I'd say a little something about what I've been listening to in my car to and from work for a set of shifts.

This is the most time I get to listen to music as I have two kids which, as any parent will tell you (or ought to), take precedent over everything.

I'll try to make it as interesting as possible so don't worry, it won't be “This week I've been listening to (insert here) and it is really good!”

I'll be looking at doing a little review of what I've been listening to with a personal twist to it, even if it is twenty years old.

After all, that's less than half my age!

Foreword:
I sent this review to a magazine in Germany and it got rejected due to Cursed As Angels not playing the material they are after. So I have decided to post it on here. Heavy Metal covers a plethora of genres and I am not prejudiced against them!


The evening started early as I arrived during sound check and knew immediately I was in for a very loud evening at The Lion.
But then that's nothing new for this world famous venue stuck in the middle of a, now demolished, industrial site with new build homes and an Ikea being erected.
This place has truly stood the tests of time with the Landlord, Terry, being there for some thirty years now. He is a true lover of live music which makes it such a pleasure to have been going there for almost as long and see bands come and go and come back again.

After the sound check I managed to grab Stephen Jeffery and Paul McIntosh, the guitarists, from Cursed As Angels for a quick chat.
I asked them how they felt about finally getting the album out.
“Feeling good!” Was the response from both, smiling and stating they are relieved and happy it is finally out.
And it's easy to understand why.
“It's been a long struggle,” says Steve while they both go on to explain why there has been a five year gap between their last album and their new offering to the Metal World, titled 'And As The Orchestra Plays'.
Following the release of the last album in 2008 there were several line up changes which ended up with the band splitting up.
Some members continued as Above Ceres (some of their songs are included on this album) and eventually reformed as Cursed As Angels with Owen (Omen to his friends) returning to make the line up complete.
Then Steve decided to cut the top off one of his fingers on his fretting hand which caused inevitable delays while this was sorted.
Still, the final product is here with us now.
Are they happy with it?
“Yes,” they agree.
“The production is so much better than the last album. There's been a big learning curve since then,” says Paul with Steve interjecting, “We managed to get all the effects this time which makes a huge difference.”

The first band on is Darkeye.
I've not seen them before but the bassist is Jeff Barber who also plays in Khthon. And if Jeff is on the stage you know it's going to be HEAVY!
And heavy it is indeed.
A five track set which delivers nicely with some nice time changes and the occasional blow to the chest.
One thing I've always liked about seeing bands play is when they are having fun, don't take things too seriously and interact with the crowd.
With Darkeye you get all of this.
“This next one is called 'Portent'. It's about poor tents.”
Classic!
And it'll be interesting to see if Moth Man becomes a theme for Dead Eye as Pig Boy did for Violation Complex.
Did I mention there's ex members of The Complex in them?
I certainly look forward to seeing Darkeye again.

Next up is Unforeseen Prophecy.
I'm a big fan of UP and have seen them many times where the set has been pretty damned amazing.
Unfortunately this was not to be one of those times.
Whilst they gave it their all, the sound was pretty awful and the vocals were barely audible which is a real shame because when they have the right sound they are awesome but this is, after all, a review of the night in question.
This is their new guitarist Aaron Jones' second (I think) gig with them. He appears a little cautious in his playing at present but I'm sure this will pass in time when he settles in a bit more.
I can't honestly say much more about UP tonight which is a shame. Although they did play 'Placebo Effect' which is a brand new song and a few favourites such as 'Oblivion' (“That's the slowest you'll hear from us!”), 'Silent Voice' and 'Fractured'.

Silas take to the stage and everyone seems to be outside smoking or in the adjacent bar nattering.
Once it's realised they are playing the hall soon fills up and Silas do what they do best... ROCK LIKE HELL!
They play all the tracks off their self released 'World Of Colour' EP.
It's so clear to see that Silas love doing what they do and why they do it.
Not only do they rock. They groove, they funk, they jazz and rock some more mixing all the elements to give a sound that is somewhat unique and hard to place into a genre, which suits me just fine, but if I have to I'd say Classic Alternative Rock.


When I first saw Cursed As Angels – before they split up - I didn't think they were much to write home about. Whether it was just me being more of a Death Metal fan or the sound or the end of a very long day I'll never know but you can rest assured that I have completely changed my mind now!
Since getting back together they have done nothing but impress me and tonight is no exception.
The stage presence of all the band is one of sheer enjoyment to be playing to a crowd that clearly like what they are doing.
One thing that I always like to see is a band enjoying themselves on stage. This is always a winner for me so take heed if I'm reviewing your show!
As this is the album release party for CAA they play the album in its entirety. This has proved risky business for bigger bands when they first release an album but not for CAA.
They take it in their stride and take no prisoners.
The sound is finally sorted for the night which pleases me and they steam through the set with Owen up to his usual antics!
He has a fantastic voice which compliments the style they play.
The guitarists work together perfectly, Stephen Jeffery's crowd interaction is immense (jumping in and playing and posing for photo opportunities is awesome!) and the bass and drums are heavy as fuck!
I really enjoyed CAA this evening and I hope this album gets noticed somewhere and the next one gets wider distribution. 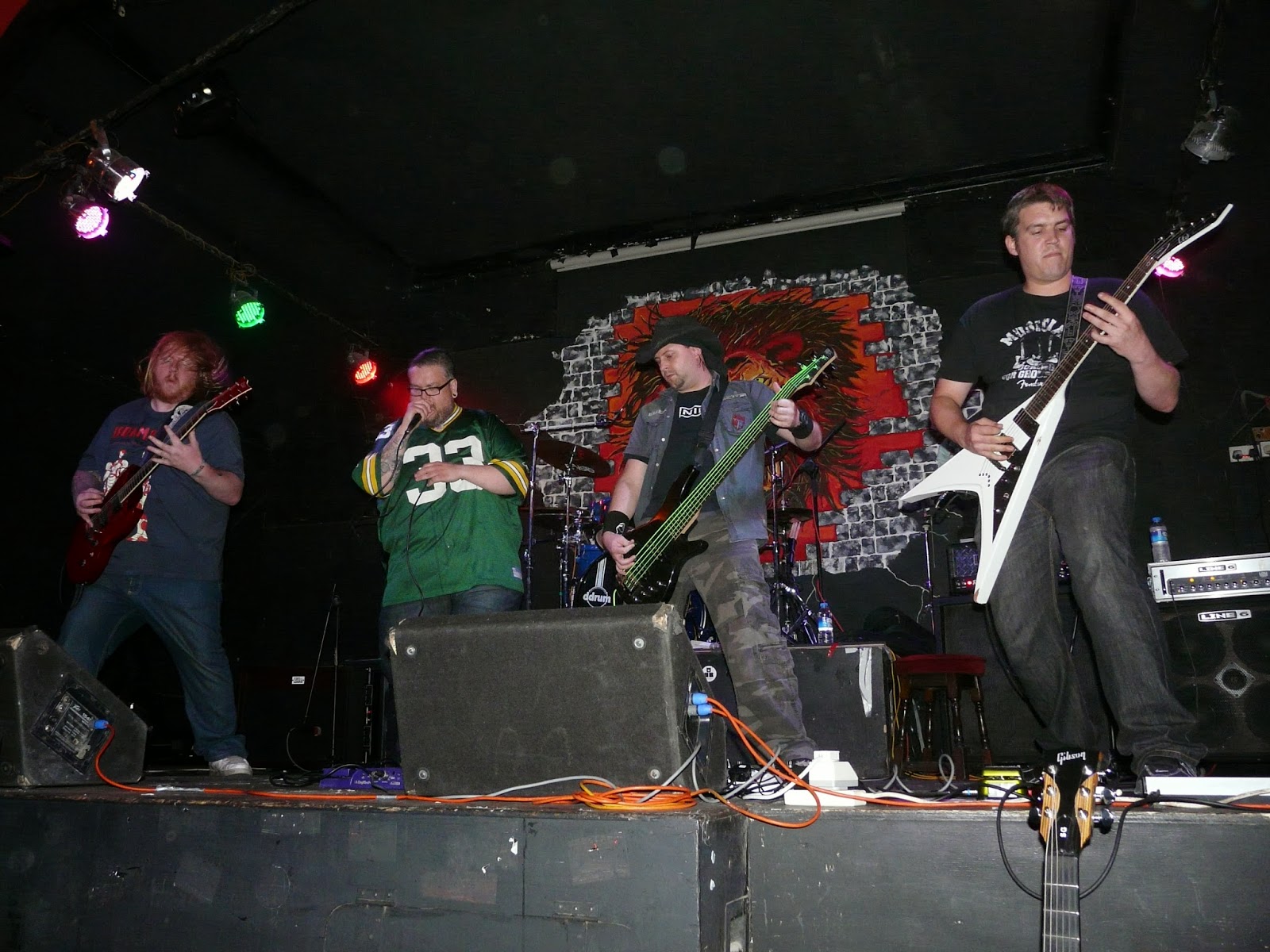 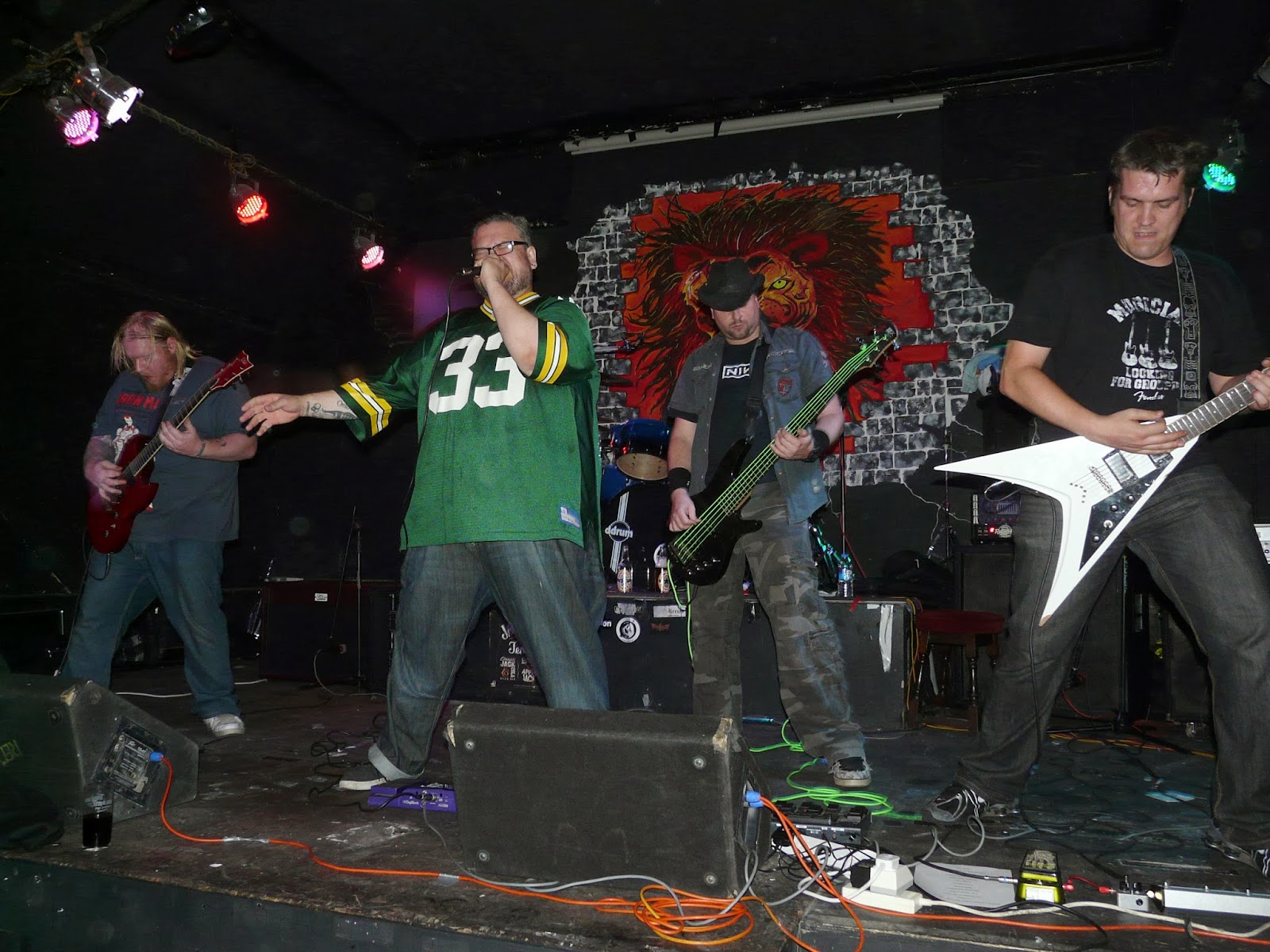 All in all a great night with only a few minor issues with the sound earlier on. I look forward to seeing all the bands again in the very near future.

The first thing about reviewing an album is to recognise the song content along with the music.
There's no point in having a really great sounding metal song then finding out the lyrics are about fluffy bunnies!
It's just not metal.

So I asked the band for a précis of the lyrical content to help me with this review. No point in bullshitting that I figured it out myself eh?!

An instrumental intro 'Above Ceres' leads into 'Control', a song about autism and the everyday struggle and differences of being autistic.

It fires off the album nicely and it continues to knock out great song after great song with varying content dealing with things such as depression ('The Absence Of Light'), how shit humans are towards each other ('For Destruction'), Vampires ('Becoming') and being at a funeral and realising that it is really the end ('And As The Orchestra Plays').

I'm not the type of person that strips down and analyses every song when I do a review of an album as I don't see the point.

All in all this is a very solid sounding metal album with only one criticism. The volume could have a been set a hell of a lot louder.

That's to say when listening to it on the same volume settings as other recent albums I needed to turn the volume up.

I'm also not the type of person to give a mark out of whatever for an album.

I can only recommend or not that an album is worth your purchase and this is one that I strongly recommend.

As usual the whole gig can be found on my YouTube page and for more Heavy Metal shenanigans check out my Facebook page!

You may or may not be aware that toward the end of last year I posted a poll on my Facebook page.

It was basically ten of my favorite UK underground albums that had been released in 2013.

Cursed As Angels - And As The Orchestra Plays

Click on the band name for a link to their site and the album title for a video from the album.

With the exception of Merciless Terror, Onslaught and Training Icarus they are all videos shot by me which can be found on my You Tube site along with over 2000 other videos.

A draw between Onslaught and Wretched Soul.

I think that's pretty damned amazing considering Onslaught are the undisputed UK Metal titans and for a band who, let's face it, are new to the scene in comparison to draw with them is quite a feat.

As Si from Anihilated said, "to be honest not a weak album on the list".

And I couldn't agree more.

2013 was a great year for the Underground Metal Scene and it was really difficult narrowing it down to just the ten for the poll.

Thanks to everyone that took part. I'll hopefully remember to do the same this year as I had fun!

If I have it right you can also subscribe to this Blog via an RSS feed here!